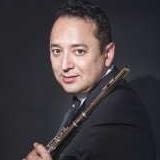 He has performed as a concerto soloist with the many of the major orchestras in Latin-American. Mr. Goñi has also participated as a principal flutist with the Pacific Music Festival in Sapporo, Japan under the baton of Michael Tilson Thomas, the Festival Youth Symphony Orchestras of the Americas and the Sewanee Summer Festival Orchestra. His recitals have taken him throughout Latin America, USA, Europe and Asia. He studied at the Juilliard School of New York and the New World School of the Arts in Florida. Some of his teachers include the renowned Christine Nield, Gro Sandvik, Eldred Spell, Dieter Flury, Susan Milan, and Samuel Baron, among others. He received the Myrna Brown Award for the International Guest Artist at the National Flute Convention in Columbus, Ohio 2000 and the Leadership of the Americas in 2004, and the Costa Rica National Award of Music, 2013. Gabriel is also a certified wind instruments technician from Yamaha Corporation; He studied under the supervision of Hiroshi Nakajima and Osamu Yoshida at the Toyooka Factory in Japan, and with Sarah Merrow in Boston. Mr. Goñi also holded the positions of Academic Dean of the National Institute of Music of Costa Rica, General Manager of the National Symphony Orchestra of Costa Rica and Director of Programs of the Youth Orchestra of the Americas. Actually he is a Flutist of the National Symphony of Costa Rica, General Director of the Costa Rica National Center for Music, teacher of the National Institute of Music, the University of Costa Rica, visiting teacher of the major Conservatories and Schools of Music worldwide. Advisor and consultant of the Emanuel and Haynes Flutes. Gabriel has a love for music. He has wanted to be a flute player since he was ten years old and his grandfather was also a flute player which inspired him to go on and study music and make it his life and way of living. Gabriel also works for the public good to help teach young children in Latin American countries the flute with other musicians. One of the keys to his success is to never stop learning. Gabriel has had many big moments performing all across the world and winning flute competitions, but his proudest and happiest moments are seeing his students go on to win orchestra positions globally and reach new heights which he sees as part of his legacy. Helping young musicians is very important to Gabriel.