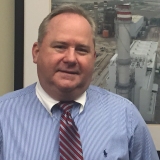 Wade has been at CYMI for the past 7 months. He has been working in the Petrochemical and Infrastructure industries, providing engineering, procurement, construction and maintenance for facilities along the Gulf Coast and in the mid-America region. He is also in charge of a large 34 million dollar engineering construction proposals. Wade provides leadership and guidance to the engineers, hiring the employee's and still doing some engineering himself. He has a crew of 21 engineers that he is in charge of. Over the past several years Wade has worked at Shermco Industries, Jacobs, and Campos Engineering Inc. What prompted Wade to get involved with his profession was a drafting class that he took in high school. He fell in love with drafting and after graduating high school he was awarded a scholarship for a drafting design and technical degree Associate of Applied Science in 1981. Wade believes that the key to his success was due to the fact that he learned the fundamentals of engineering and was able to apply them to his career that made him stand out in his industry. He wound-up in a class through his church that was teaching family dynamics and learned and applied all the information to his career. As a leader he focuses on how to fix mistakes instead of just focusing on the mistakes. He believes in positive reinforcement and never uses negativity as a repercussion to a mistake that has been made. In the future Wade would like to become a 60 man engineering group. He would also like to have 5 generals and 50-55 people under them. He would like the business to grow an additional 30 million dollars in revenue over the next 4 or 5 years. The highlight of his career was when he received his engineering license that took him 8 years to achieve. He is also a proud of the development and establishment of the family dynamics in the career.