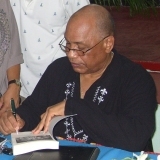 Januarius Lambart St. Rose is a highly motivated individual who has excelled in his career by helping people throughout his life. He is a well recognized Priest and published author who is known for his work worldwide. Fr. J. Lambert St. Rose is a native of St. Lucia. He has spent most of his thirty-four years as a priest working among his people - something he derived great pleasure in doing. He holds a Master’s in Theology with emphasis on catechesis. His real forte - wayside, open-air evangelization – is a most powerful and useful tool which enabled him to build and sustain a vibrant parish community wherever he was assigned to. Passionate cultural protagonist, avid proponent of inculturation, he is a firm believer in the notion that the people and their culture must be the starting point for any effective catechetical process or evangelization program. This approach necessarily placed him in very close contact with his parishioners; he felt their heartbeat, he felt their pain – as much as he understood their patterns of thought, their sense of judgment and popular belief systems which were, most times, inconsistent with the Christian faith they professed. That, surely, was what opened the door to the flood of exorcisms which he was ill-prepared to deal with in the initial stages of his priesthood. J. Lambert St. Rose, famous for his profound sermons and homilies, delivered with sterling clarity, has undoubtedly captured the hearts and minds of his listening audiences over the years. In his new incarnation as poet and novelist, he is raising eyebrows and stimulating the consciousness of his reading audience to an all new level. In his anthology: “Helen and Her Sister Haiti”, a theological reflection on the social, historical, economic, religious, political and national consciousness with a call to conversion”, (2011) he challenged the peoples of St. Lucia and Haiti to take cognizance of their struggles, their victimhood and their formation as a people in a post independent era. He further dared them to translate their sojourn into a new religious experience in a manner that will prove they are active participants in the incarnation with Christ Jesus, and to experience themselves as dynamic contributors to their ongoing furtherance and development as a people of God. In a recent novel, In Turbulent Waters (2014) - a best seller at home, he unearthed the darkest side of his people’s culture and history and again appealed to their good sense to seek the path to conversion and peace. His newly published anthology: Our Father, Prayer and Praxis is again another daring exposé of the existing disparity between prayer, spirituality and social justice. A mind boggling discovery which begs the question: Why? Why do we not practise what we pray and why do we always do the opposite of that for which we pray? J. Lambert St. Rose completed his priestly studies at the Regional Seminary of St. John Vianney in Trinidad and later earned a Masters in Theological Studies (MThs) from St. Norbert’s College, De Pere Wisconsin. He has authored “Helen and Her Sister Haiti” and “In Turbulent Waters”, published by AuthorHouse, Bloomington, Indiana.